My last post was mainly focused on the negatives of my experience of the London Marathon, as I was feeling quite down about it for a few days afterwards. Another week has now passed and I’ve been trying to put it in perspective, so thought it might be useful to make a list of the things that DID go right for me.

Socks – after a lot of deliberation, and many pairs of socks bought, I decided to wear a pair of 1000 Mile socks. These had proven comfy in training, and are trainer socks, as an added vanity bonus. At the end of 26.2 miles I had a blister on the inside of my big toe but it didn’t hurt (I’ve been walking around with that blister for a week and it still doesn’t hurt).

Shorts – another area of deliberation, I was all set to wear my very comfy Nike Tempo shorts but decided that the back pocket was too small. I trained with ¾ length tights from Decathlon under my shorts, and two weeks before the marathon I bought another pair in the same range, but mid-thigh and neon pink. I know you shouldn’t wear new things on race day, but I cut all the labels out, knew that they fitted as I’d worn an identical (but longer) pair and was absolutely fine with these under my (really quite short) Asics shorts.

Other clothes – I had a tshirt made with my name on it and the charity’s name. I left this until quite late but ordered it through www.personaliseyourvest.co.uk, who were great. It fitted well and all the silly stuff I had printed on it made me laugh. I wore underwear that I knew would be comfortable. I also wore a jumper to the start line that I gave to one of the volunteers just before we started. Apparently all this gets given to charity.

Sunglasses – I hate squinting into the sun, and I feel like my eyes are quite sensitive to sunlight, so I like to wear sunglasses. Good choice, as it was a bright day. And an even better choice as they hid my miserable face.

Running without music – normally, when I run I’m running by myself, around less salubrious parts of south east London, so I listen to music. I was worried beforehand that I would miss having music (I found the 10k that I did without music really… boring) and took my ipod with me, but never fished it out. I was glad to have it before and after: on the way to the start line it was nice to have something to distract me, and afterwards I found all the crowds quite stressful and liked having music to help get to the tube.

Getting to the start on time – I had a bit of a disaster a few weeks ago when I’d entered a 10k but couldn’t find the start (I hadn’t checked WHERE in the park it started) and rode around in circles looking for it, eventually getting there too late to take part. All the literature for the London Marathon advises you to get there extremely early, and I was initially planning to leave the house at 8am, which would have meant a lot of hanging around in Blackheath. In the end I timed it so that I got to the start with about 45 minutes to spare, plenty of time to check in my bag and go to the loo.

Not meeting people at the end – a few of my friends offered to come and meet me at the finish, but I didn’t want to insist that any of them did, so said I’d make my own way from the finish to the bar. I’m so glad that I did this as the finish area was crazy busy and completely overrun with people. I could focus on getting out rather than trying to meet up with anyone.

Yesterday I ran the London Marathon, my first ever marathon and first race over 10k, thanks to flooding cancelling the half marathon I had planned.

I woke up early, excited and nervous. Runners are meant to get free train travel on the day but the woman at my local station was having none of it. At Blackheath it’s a

short stroll up on to the heath to the enormous start area. I was in the blue start zone, and once inside it felt like a festival – all the bad bits: queues, people shouting into megaphones, crap fancy dress, portaloos, female urinals… I dropped off my bag and headed for the starting pens.

The London Marathon is so big that there are 3 start zones. Within each start there are 9 starting pens, which are allocated based on the finish time you put down when entering the ballot 12 months previously. It is therefore a massively flawed system as people under- and over-estimate their times. I was in the last pen, but fought my way to the front. When it started, we were herded, behind police tape, slowly forward, keeping a 50m gap between us and the pen in front, with the people behind me pushing – quite unpleasant.

Crossing the start felt like a relief. Almost immediately I saw two friendly faces. I knew what time I wanted and kept my pace steady.

By mile 5 it was hotter than I had expected, or had trained in. I drank some water, but tried not to drink too much. My gel belt was jumping about a lot so I kept having to adjust it. I felt alright. I saw more friendly faces at Greenwich and just after. I drank more water.

A couple of years ago I had problems with my ITB, but had been fine following lots of physio and strengthening exercises. At mile 10 it seized up, causing me terrible pain. Every step from this point was agony. This was the turning point in the day.

I have a vague recollection of crossing Tower Bridge but don’t remember much between 11 and 16. I was drinking way too much water as I just couldn’t cool down, I was so hot and feeling quite delirious. I was finding the crowds (both runners and cheerers) really oppressive and although I knew I should stop drinking, my lips were scabbing over and I couldn’t deal with the heat.

At about mile 16 we entered Westferry Circus underground roundabout, where the shade brought me some much needed clarity. I decided to stop for the loo, hoping that would help me feel a bit better – I’d been retching a bit. This helped, and I carried on, feeling less grim (as much as you can feel better when your leg feels like it’s on fire) until I threw up, with no warning, at about mile 18.

My body was finally rid of the excess water (and any energy gels I’d forced down) but my race – such as I’d planned – was over, I couldn’t run properly. I had no energy left in me, and I was devastated that I was going to miss out on my race goal. I set myself another goal. I cried, bitterly disappointed that after all this time, all this effort, I was letting myself down. I’m so glad I was wearing sunglasses.

I saw more of my friends, and then at mile 22, my brother and my mum. My brother was shouting “you’re amazing!” at me and I wanted to give him a hug, but I carried on, into the horrible Blackfriars tunnel, where the noise from the music blaring overwhelmed me (not in a good way).

By the time I reached the Embankment I’d stopped crying, I was too focussed on dragging my leg along, wincing. It was getting more painful, I kept trying to dig my thumb in to my ITB to relieve some of the pressure but couldn’t. I knew I was going to miss not only my original goal but also my revised goal and I didn’t want to be there any more.

I managed a sprint finish, my leg in so much pain but the rest of my body competely able to do it – making me more annoyed that one part of my body had let the rest of me down. Everyone else shouted “YESSSSS!” as they crossed the line but I said “well, at long fucking last”, which is probably not in the spirit of things.

I finished a few minutes over 5 hours, a huge let down.

A number of things:

– My ITB. I’m not sure what I could have done about this on the day but I definitely need to work on strengthening the surrounding muscles to help prevent it happening again.
– I drank way too much water. Whether I had hyponatraemia, I don’t know, but I felt terrible, sick and totally spaced out. I’m not sure I’d have been able to tell you my name during those miles I can’t remember.
– I drank all the water because I could NOT cool down. Afterwards I discovered that I was quite badly sunburnt (the joy of Irish blood).
– My gel belt never really stopped jumping about and my side/back is bruised from it.
– I didn’t have the mental fortitude necessary when all the chips were down. It just seemed insurmountably hard and I regret not doing more 20 mile runs, so that I could have called on these memories to prove that I could do it.

Firstly, my friends are amazing, and seeing their faces out on the course and in the bar afterwards was lovely. I can’t believe so many o 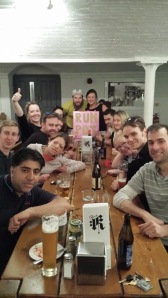 f them made the effort to come and watch. I feel really touched.

Secondly – and why this was a surprise to me I don’t know – I don’t like crowds. I’ve always hated big festivals and stuff like that, so running with 37,000 other people, being shouted at by many thousands more, was horrible. People say that the London Marathon is great for the support and that having people shout your name and cheer you on is amazing – but I hated it, every time someone said my name when I didn’t know them I wanted to punch them. I found the noise too much, the number of people too high. I loved seeing people I knew, but if I was ever to do anything like this again I would not put my name on my tshirt as it was really distracting hearing my name from people I didn’t know. I like running on my own listening to music, or maybe with a friend, so I found the shouts, the bands and the drummers way too intense.

Would I do it again?

I definitely wouldn’t do London again. I didn’t enjoy it, I didn’t like the crowds.
But I feel like I have to do another marathon, to prove to myself that I can do better.

I wouldn’t have got through the training or the day without the support of my friends and family, in particular: my mum and my brother (Chris has been a particular source of good advice throughout); Lou and Ant, who made the most amazing sign; Neil, who has tolerated daily panicked emails with the patience of a saint; Andy, who wasn’t there but was there throughout the whole winter and never once winced looking at my feet; and my phenomenal housemates, Tomlet and Tanyapants. Thank you xx