Another outing for the Wimbledon Common Half Marathon. I signed up for this in the aftermath of October’s edition, suckered in by discounted entry.

The alarm went off early and I opened one eye, thinking I might have been burgled until I remembered I’d emptied out all the cupboards looking for the shorts I wanted to wear. No sign. Who stole my shorts??

I didn’t want to cycle to Wimbledon so decided to take the train from Streatham Common to Barnes, and cycle the remaining 15 minutes. But I went to Streatham station, not Streatham Common, meaning I had to cycle almost the entire way there. It was a beautiful day and I was wearing a hat I’d crocheted the day before.

Milling about in the sun at the start line, I tweeted to help quash the nerves then queued for the loos, getting angry at the girl who pushed in front of me but saying nothing.

The race started and I felt a sense of antipathy and vague misanthropy towards my fellow runners. Antipathy as I could tell it wasn’t going to be a great race (illness, under-training) and misanthropy as people refused to run in a straight line, made annoying sounds or stopped in front of me on the hill at the back of Putney Vale Cemetary (my only strength is that I have trained myself to be able to run up hills at the same speed I can run on the flat – not fast, but no slower than normal).

My back started hurting around 5km in and I was faced with a choice: carry on and do a dismal time or quit at the end of the first lap and slope off home feeling annoyed. A quote I think about a lot, and feel ashamed for doing so as it’s a fucking Lance Armstrong quote is “Pain is temporary. Quitting lasts forever” So while my back felt like it was being mangled, I couldn’t bring myself to quit. I can’t keep quitting. I’ve quit several things this year (the Tadworth 10 with a twisted ankle and a Parkrun with a twisted ego) and every time it chips away at me.

So I trudged round, feeling lonely, feeling a bit sad, thinking a lot. I had my ipod with me (I’d foreseen the loneliness) but didn’t put it in as I felt it would be making a statement I didn’t quite understand the implications of.

When I’m feeling like this, my ultra-British nature comes to the fore and I pretend to be super chipper. Smiling at marshalls, waving at spectators, going out of my way to help other runners (one woman face planted on the downhill section so I stopped to pick her up and kept insisting she check her palms for gravel) and, of course, hamming it up for the womble at the halfway point.

Getting a hug from a womble lifted my mood for about 3 minutes and then I was thrown back into the 21.1km journey into the dark bits of my mind, with accompanying backache.

At one point I went for a wee behind a tree, to break the monotony. I lost the timing chip attached to my shoe and had to go back into the bushes to retrieve it.

I finally crossed the finish line 7 minutes faster than last time but more than 12 minutes slower than Wokingham last month. I bought a coffee and took a free orange, which took me 10 minutes to get into. I couldn’t face cycling home, or going anywhere, or doing anything, so I turned down the offer of lunch with a friend in Richmond and dragged my broken body and battered ego to the toilets at the nearby Asda and lay on the floor for a while, waiting for the coffee to undo the effects of immodium and for some sense of purpose, or achievement, or contentment.

Oh, and my shorts? They were at the back of the section of my cupboard designated for, erm, running shorts.

On first glance, running races and clubbing are worlds apart. One is the epitome of healthiness; the other, well…

– Sweating – both activities leave you soaked, glistening like a hog on a roast.
– Gurning – it’s sometimes hard to keep the faces under control when clubbing, but deep into a half marathon my teeth are covered in energy gels and mouth gunk and, despite my best attempts when I see someone with a camera, I usually look like I’m being slowly electrocuted.
– Clutching a water bottle in your sweaty paw – see also, tripping over discarded water bottles.
– Neon – at least when you’re running it’s sometimes acceptable to wear sunglasses.
– Fairy wings – there’s always someone wearing fairy wings. Always.
– The state of the toilets – that scene from Trainspotting isn’t far off. And there’s never any loo roll.
– Queuing for the toilets – hope you don’t need that filthy portaloo any time soon.
– Vomit – a friend of mine once threw up all over the dance floor at the Stratford Rex, it was like the Victoria Falls. I’ve thrown up in bins more than once while out running.
– Making friends with people – recently I helped someone who’d fallen over and she put her arms around me and told me she loved me. I never saw her again.
– Meticulous planning for the next “big one” – it’s the highlight of your calendar, you plan it beforehand (what to wear?!) and reminisce for days afterwards, even though you can’t remember most of it.

About 10 days ago I developed a rash on my front – on my stomach and chest.

It was itchy but I resisted scratching.

Now it’s on my back.

I can’t resist any more.

I wake myself up scratching.

I catch myself scratching at my desk.

I kid myself that the label in my shirt is itching me and that it’s okay to scratch.

My housemates think I have shingles or mites but it’s probably another allergy.

I’m going to have to start wearing socks over my hands so I stop scratching. 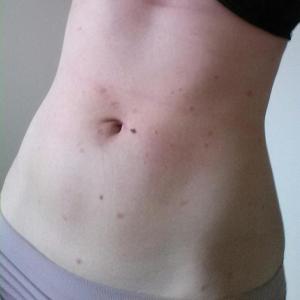 What is this rash and when will it go away?